Knowledge transfer is at the heart of our activities. During 2019, our professors, researchers and staff have ensured such transfer in international humanitarian law, human rights and transitional justice via research, our three masters, training courses, events and the Geneva Human Rights Platform.

An Intense and Busy Year

It provides an overview of our manifold research and education activities.

2019 has been an intense and busy year for the Geneva Academy with, among others: 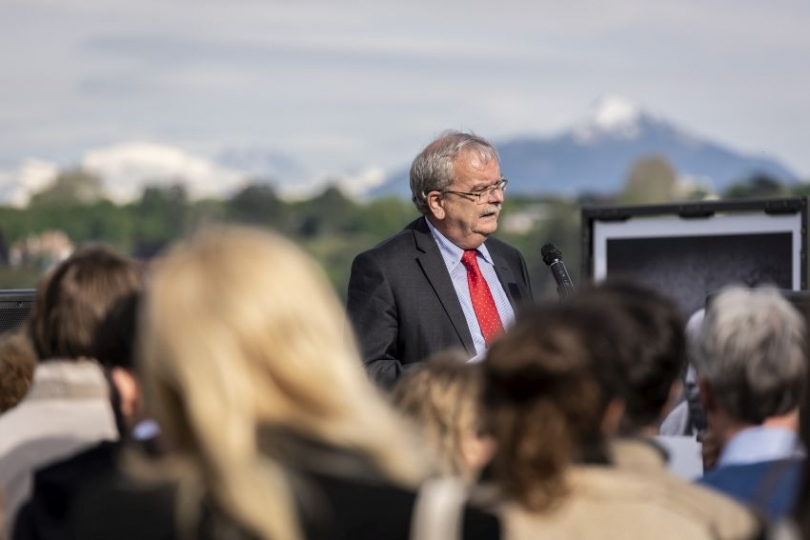 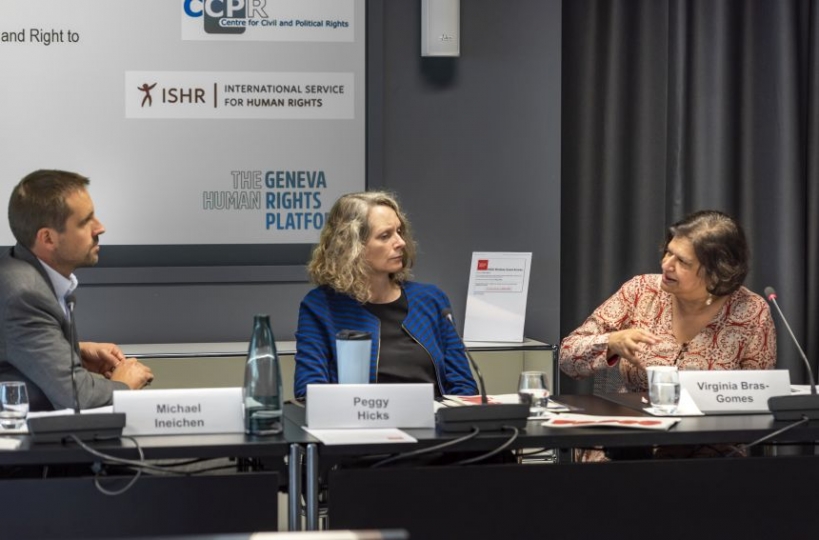 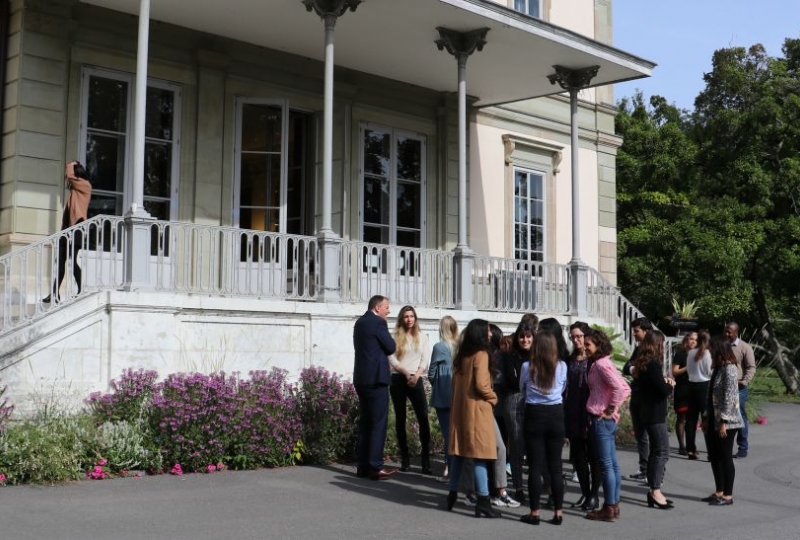 Armed conflicts and crisis that affect the lives of millions of people globally remind us of the important role of international law and knowledge transfer to protect the most vulnerable.

‘This is the meaning of our action. Solidarity with the most vulnerable that we can observe now in many countries affected by the Coronavirus gives us hope in this regard’ underlines Professor Marco Sassòli, Director of the Geneva Academy.

‘We are very grateful to our two parent institutions – the University of Geneva and the Graduate Institute of International and Development Studies –, our institutional and private donors, our numerous partners and collaborators. Our work would not have been possible without their trust and support’ he adds. 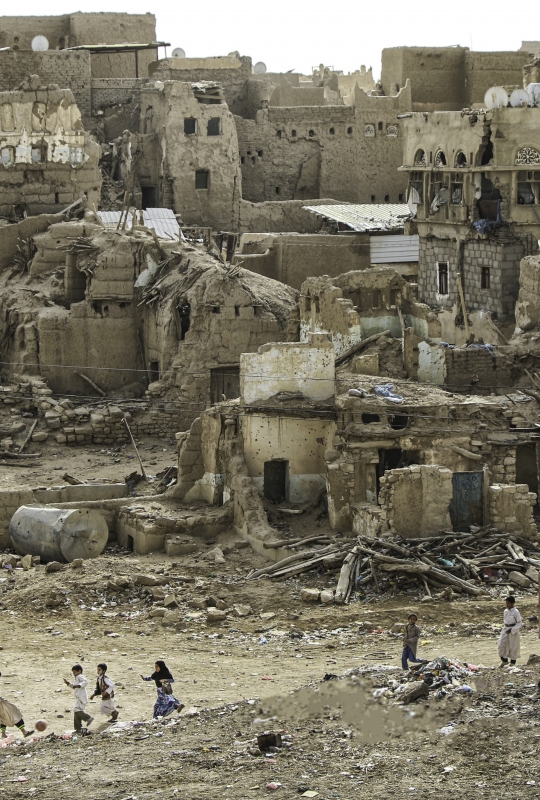 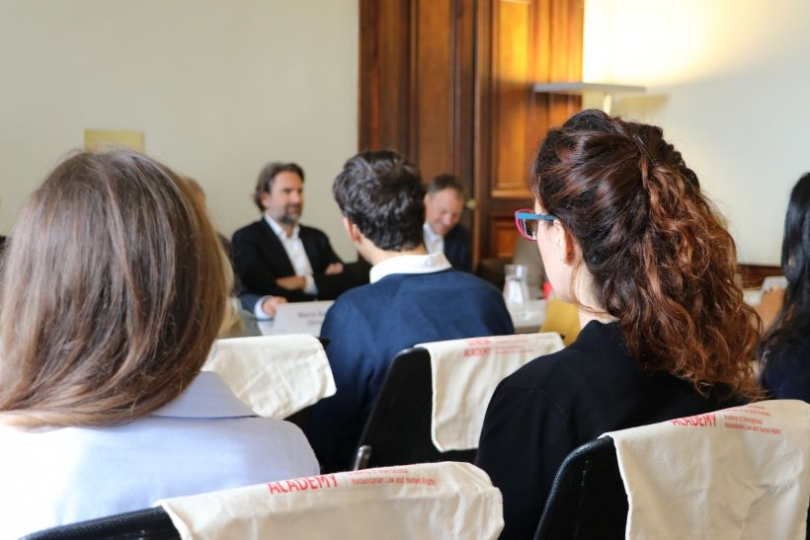 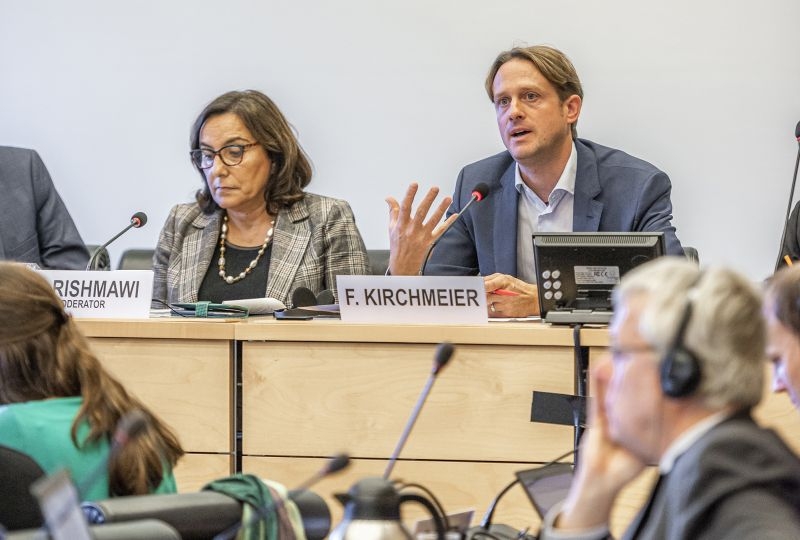 The Guidelines on Investigating Violations of International Humanitarian Law: Law, Policy, and Good Practice are the outcome of a five-year research project, initiated in 2014 and joined in 2017 by the International Committee of the Red Cross (ICRC).

The guidelines aim to provide practical assistance by setting out a general framework for investigations in armed conflict and, where relevant, the corresponding international principles and standards.

They are set to become the international benchmark for effective investigations into violations of international humanitarian law (IHL) in all conflicts around the world. Being sensitive to the differences that characterize domestic legal and investigative systems, they identify several practical and legal issues that may arise in such investigations or should be considered beforehand.

The guidelines were presented in New York to delegates from the United Nations (UN) General Assembly First and Sixth Commissions, UN agencies and other experts, and in Geneva during the 33rd International Conference of the Red Cross and Red Crescent. 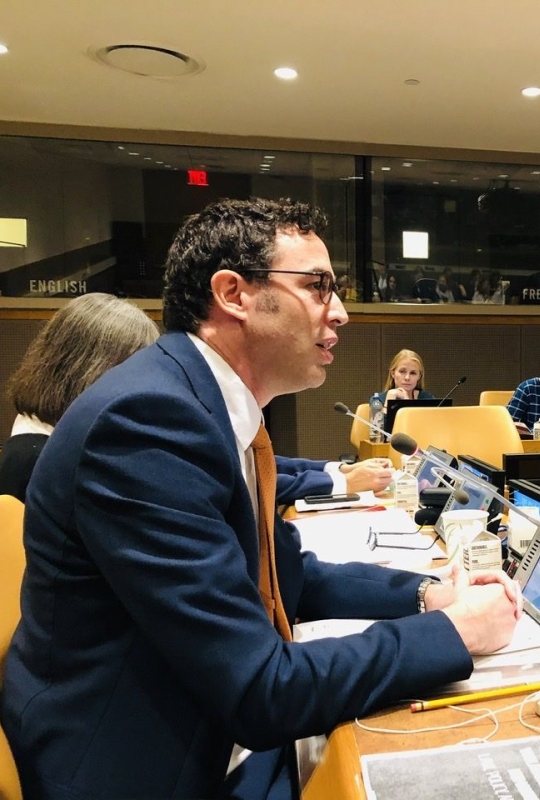 Clarifying the Modes of Liability for International Crimes

The book Modes of Liability in International Criminal Law (Cambridge University Press, 2019) aims to clarify the state of the law and provides a thorough analysis of the jurisprudence of international courts and tribunals, as well as of the questions these debates have left open.

Renowned ICL scholars analyse, in discrete chapters, the modes of liability one by one; for each mode, they identify the main trends in the jurisprudence and the main points of controversy. An introduction addresses the cross-cutting issues, and a conclusion anticipates possible evolutions that we may see in the future. The research on which this book is based was undertaken under the auspices of the Geneva Academy and involved several of our experts. 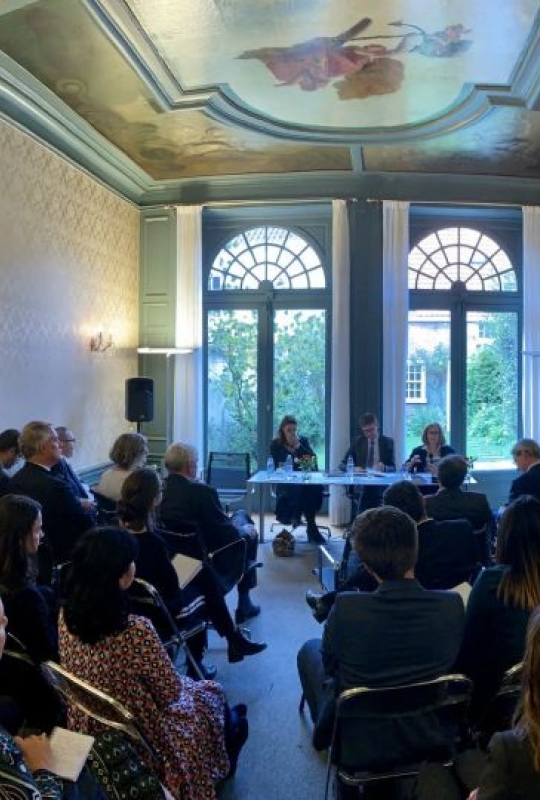 Swiss Embassy in the Netherlands

70th Anniversary of the Geneva Conventions: Briefing of the UN Security Council and Reflections on their Relevance in Contemporary Armed Conflicts

Throughout the year, Geneva Academy experts participated in several events and conferences held to commemorate the 70th anniversary of the Geneva Conventions and discuss their relevance to contemporary armed conflicts.

Highlights included the briefing of the UN Security Council by our Strategic Adviser on IHL, Dr Annyssa Bellal; the participation of our Director, Professor Marco Sassòli, in high-level panels in Geneva, Berlin, Paris and Rome; a dedicated IHL Talk and the contribution to an anniversary highlight in the ICRC’s online casebook. 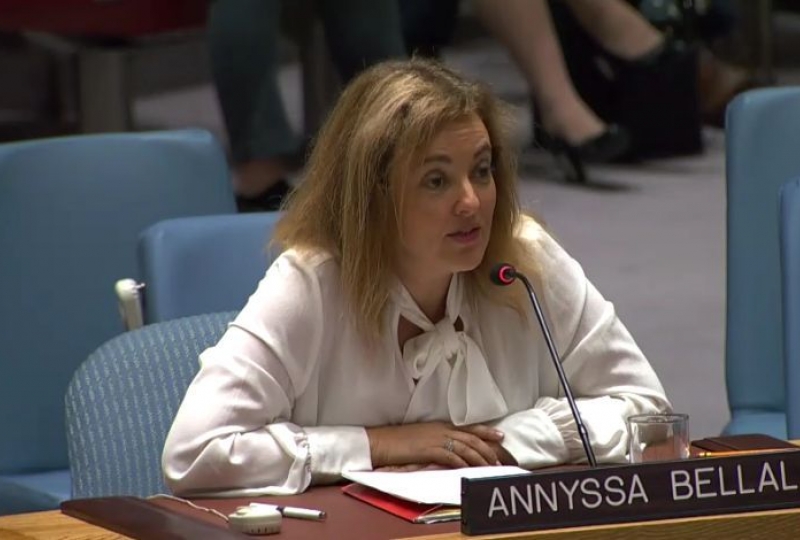 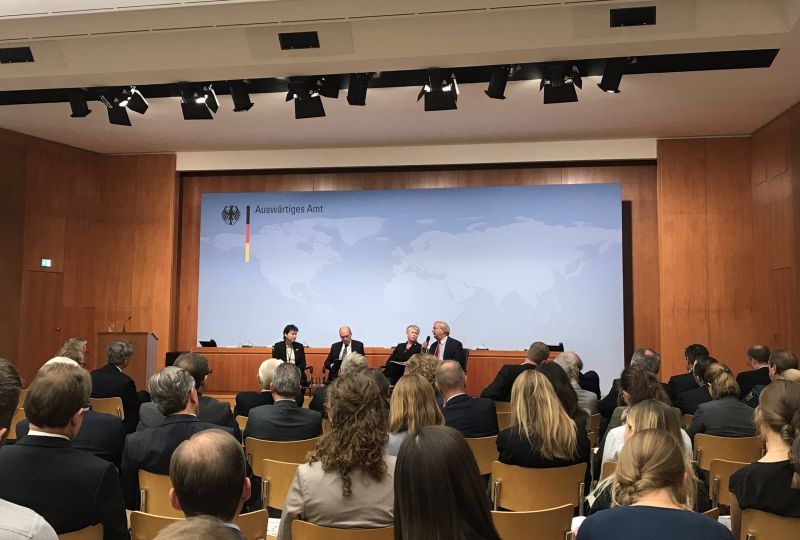 The publication Disability and Armed Conflict – the first of its kind and the outcome of more than three years’ research, including field research in the Democratic Republic of the Congo, Colombia, Palestine, Ukraine and Vietnam – draws attention to the devastating impact conflict has on persons with disabilities.

Its findings highlight that many of the key international humanitarian law (IHL) provisions that serve to minimize the impact of armed conflict – such as the proportionality assessment and advanced effective warnings – are not being applied in a disability-inclusive manner, resulting in persons with disabilities being killed, seriously injured or left behind as families flee armed attacks. The publication offers eight key findings and recommendations for states, humanitarian organizations and the UN Committee on the Rights of Persons with Disabilities to address these shortcomings.

Training sessions in Palestine, Ukraine and Vietnam provided stakeholders on the ground with an overview of international law applicable to persons with disabilities and their inclusion in norms related to the conduct of hostilities.

An exhibition of photographs by Giles Duley – held on Quai Wilson and at the Humanitarium in parallel with the publication’s launch – told the stories of persons with disabilities during and following armed conflicts. The exhibition was accessible to persons with a visual impairment. 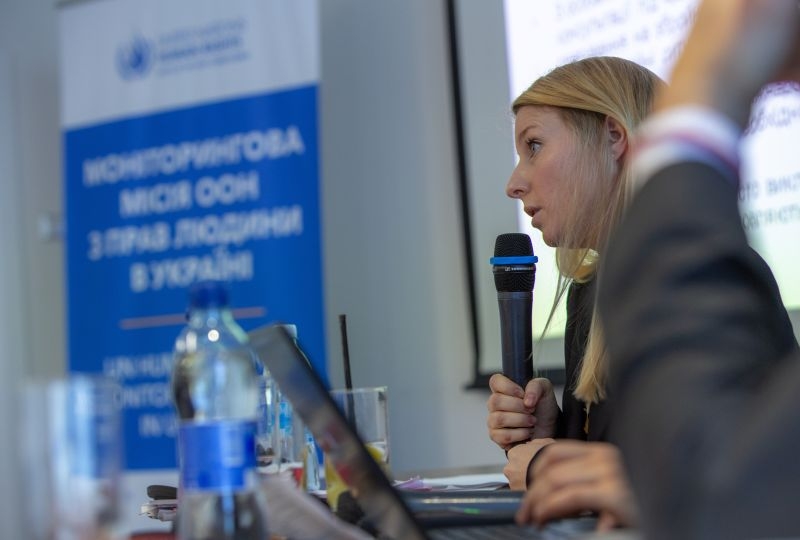 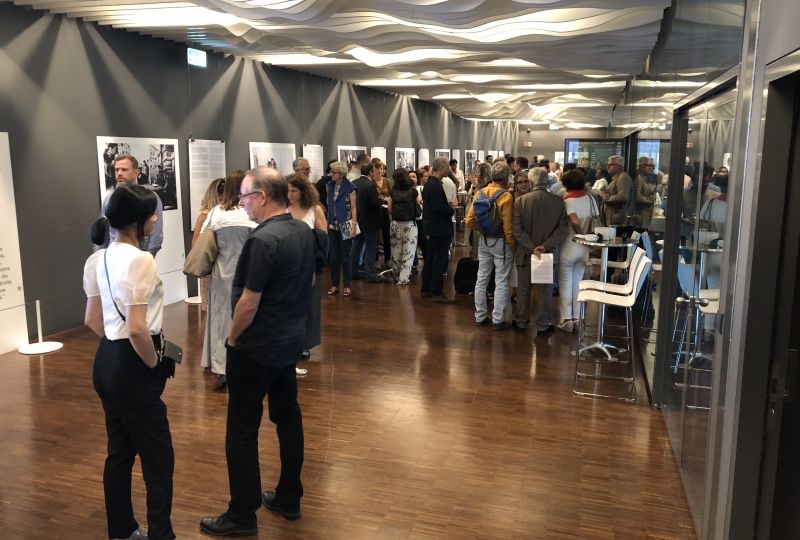 Promoting the Rights of Peasants in Europe: Focus on the Right to Seeds

In Europe, seed laws and regulations have been designed to further develop the agricultural industry in the continent, and the rights of peasants have been largely neglected.

The UN Declaration on the Rights of Peasants and Other People Working in Rural Areas (UNDROP), adopted in December 2018, recognizes the right to seeds and defines correlative state obligations.

The publication The Right to Seeds in Europe focuses on the steps that the European Union and EU member states shall take, via the implementation of the UNDROP, to better protect this right in Europe. A Successful Year for the Geneva Human Rights Platform

The GHRP notably accompanied several processes including the 2020 review of UN treaty bodies (TBs) in Geneva and New York, proposed innovative solutions to improve the work of TBs, facilitated exchanges among different constituencies of the Geneva human rights system and beyond and reflected on the links with regional human rights mechanisms. 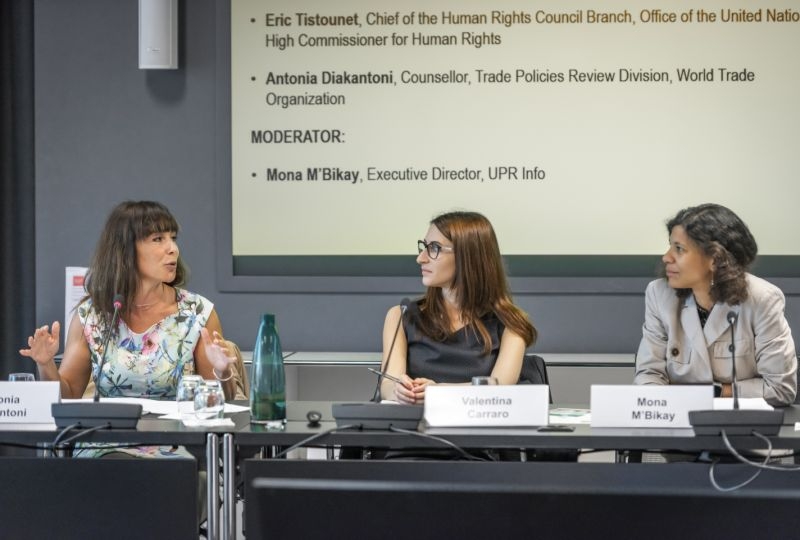 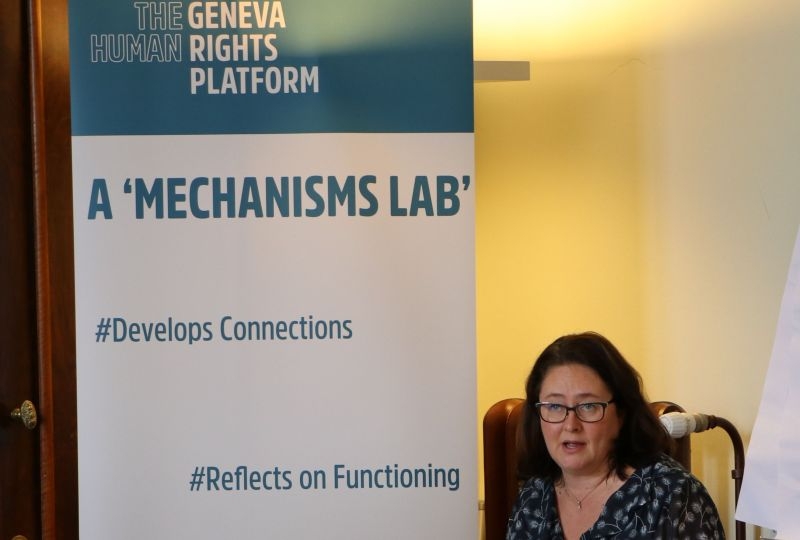 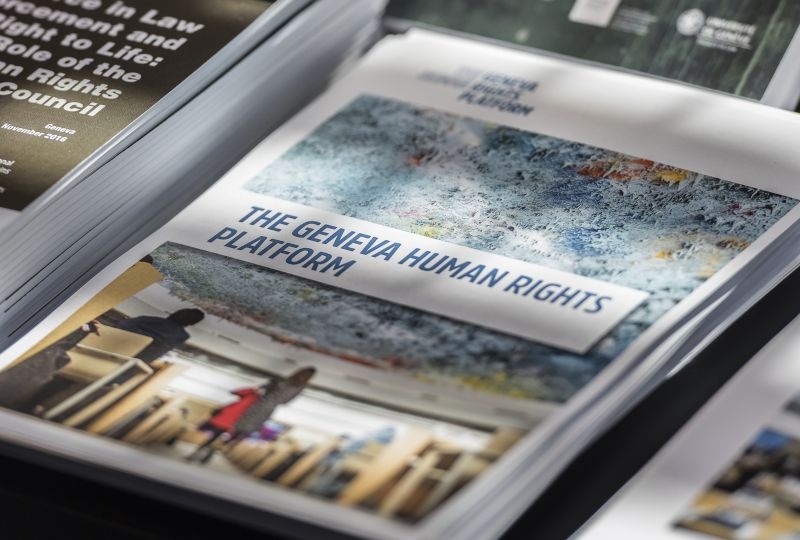 Our new training course on the Universal Periodic Review (UPR), co-organized with UPR Info and the first of its kind, explored the origin and evolution of the UPR, its functioning in Geneva and the implementation of recommendations at the national level.

Twelve participants from all over the world – representatives from NGOs, national human rights institutions and international organizations – discussed the implementation of the UPR recommendations at the national level, advocacy strategies at national and international levels, the links between the UPR and the Sustainable Development Goals, as well as good practices at the policy and field levels.

They also visited the UPR Info Pre-sessions at the Palais des Nations and a TB session to understand UPR dynamics and the synergies between TB work and the UPR. 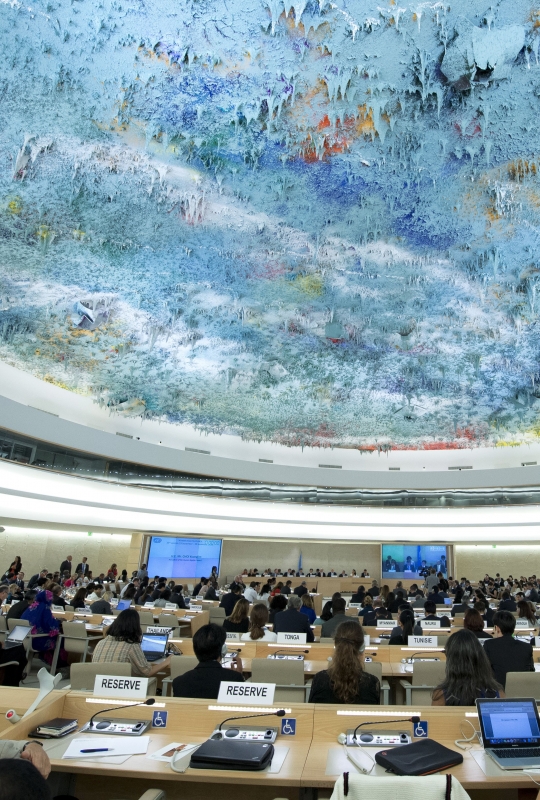 Students Design the Mandate of a Truth Commission

For three days, students of our Master of Advanced Studies in Transitional Justice, Human Rights and the Rule of Law were immersed, via a practical exercise, in the design and establishment of a truth commission following a long-lasting ethnic conflict characterized by a multitude of human rights violations committed by state and non-state actors.

Under the guidance of Howard Varney, a leading expert on the issue, they took up the roles of different stakeholders – international and local NGOs, the UN, African Union and national government – involved in the process of designing and formulating the mandate of a truth commission.

This exercise allowed students to share rich experiences and knowledge, and gain a more practical perspective on truth commissions as a central transitional justice mechanism. 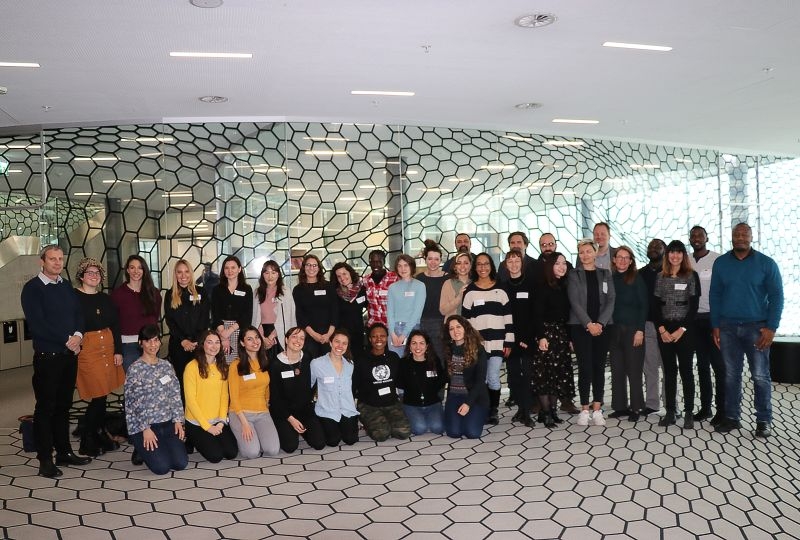 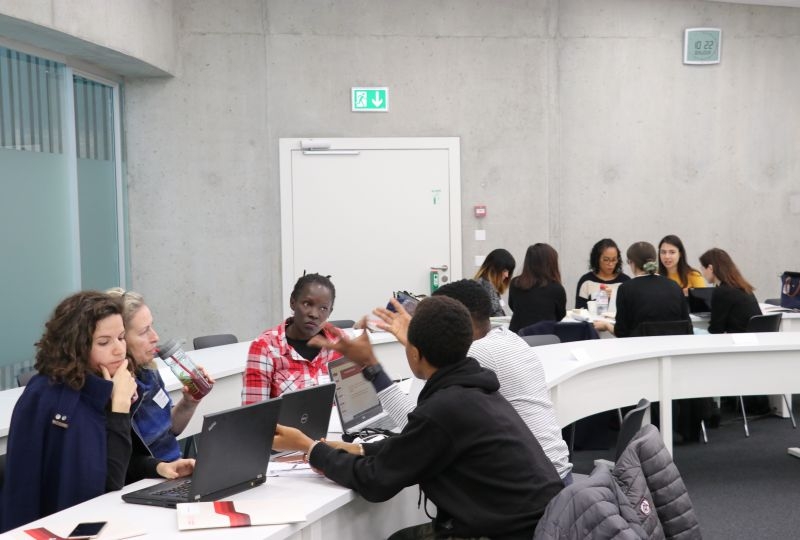 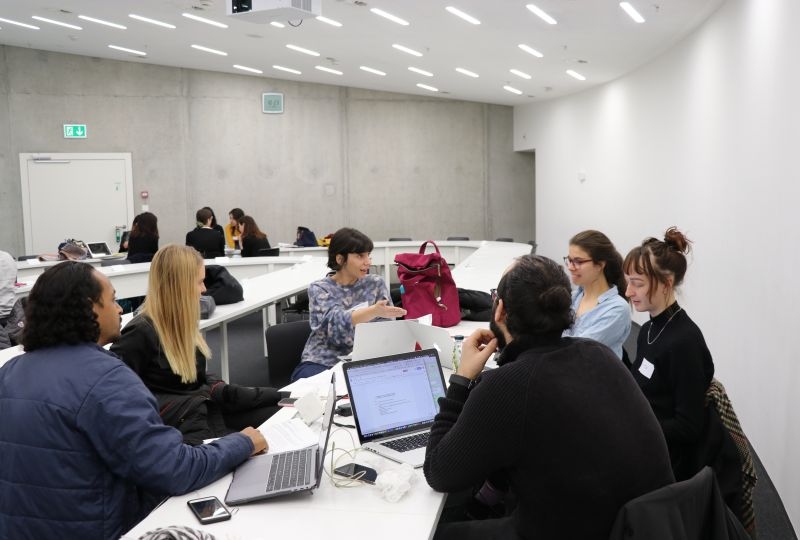 More than 100 alumni attended the 2019 Gathering: a day of reunions, discussions and exchange, which started with a lunch, continued with a roundtable, where alumni presented movies with an IHL and human rights perspective, and ended with a reception.

The day also provided students enrolled in the three programmes with the opportunity to discuss with alumni career prospects in the human rights and humanitarian fields. 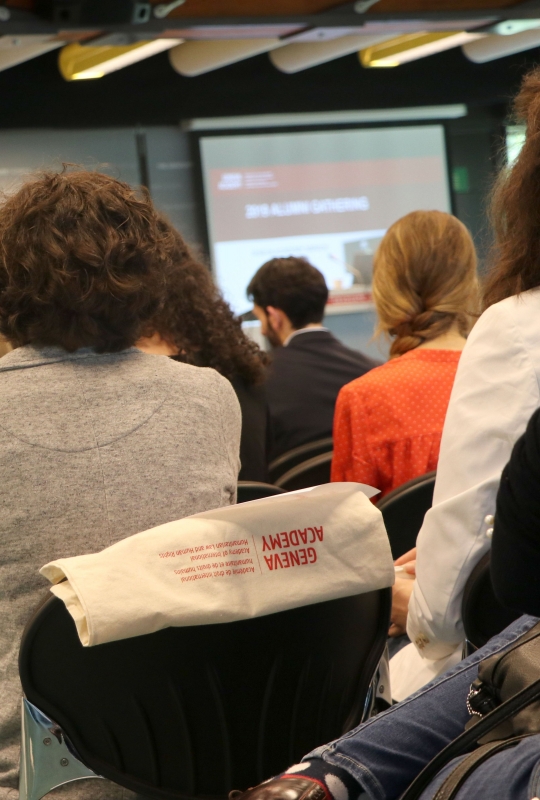 For the first time, two students from the LLM in International Humanitarian Law and Human Rights participated in the oral rounds of the Nelson Mandela Moot Court. Via practical case scenarios that involved several human rights violations, they put into practice the human rights notions learned in class, met other law students from all around the world and developed their public-speaking and presentation skills.

In order to qualify for the oral rounds, Anna Lochhead-Sperling and Paula Padrino Vilela wrote a long and detailed memorial, arguing a case before a fictitious human rights court in favour of the applicants and the government. They competed against other universities from the UN Western Europe and Others Group, which notably included Oxford, Yale and Harvard. 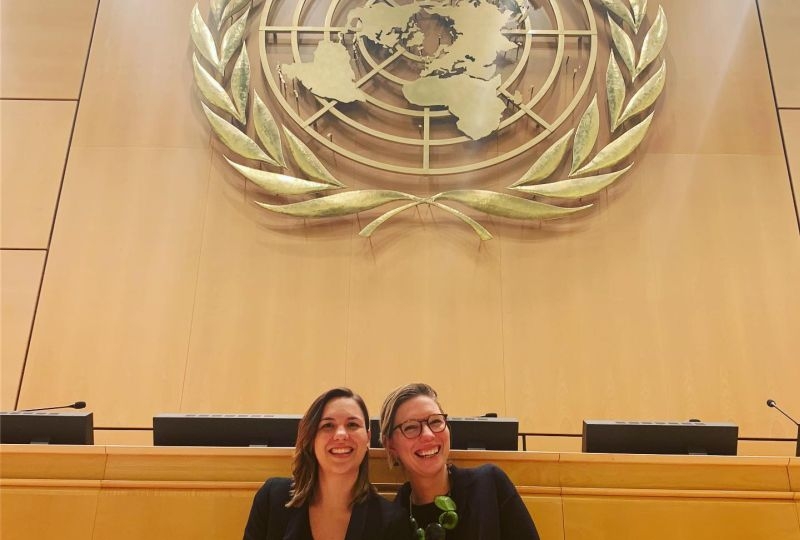 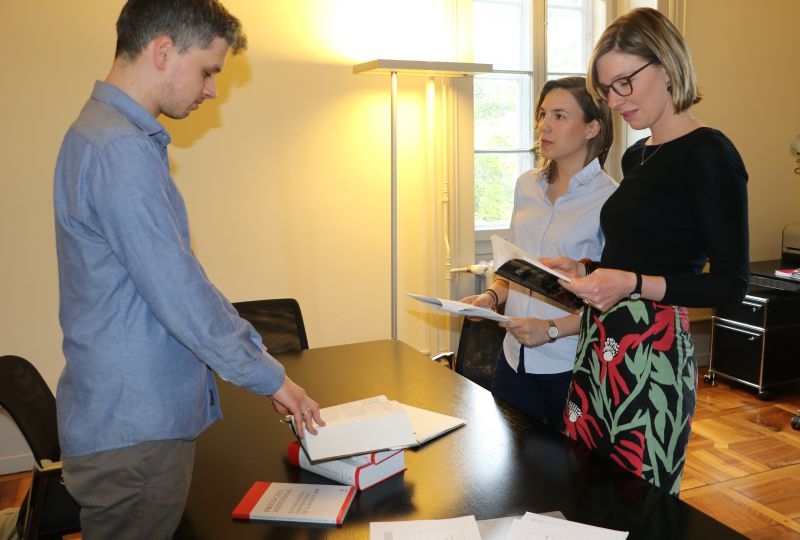 Women's Perspectives on a Career in International Law

We launched this new series of events in 2019 in partnership with the Geneva branch of the ATLAS network, which empowers, supports and connects women working in, or embarking on, a career in international law.

During interactive, open and honest discussions, women from different professional backgrounds share with the audience – students, young professionals and academics – both their experiences of what drove them into international law as a career and the challenges they faced, as well as offering advice to those currently embarking on or pursuing a career in the field. 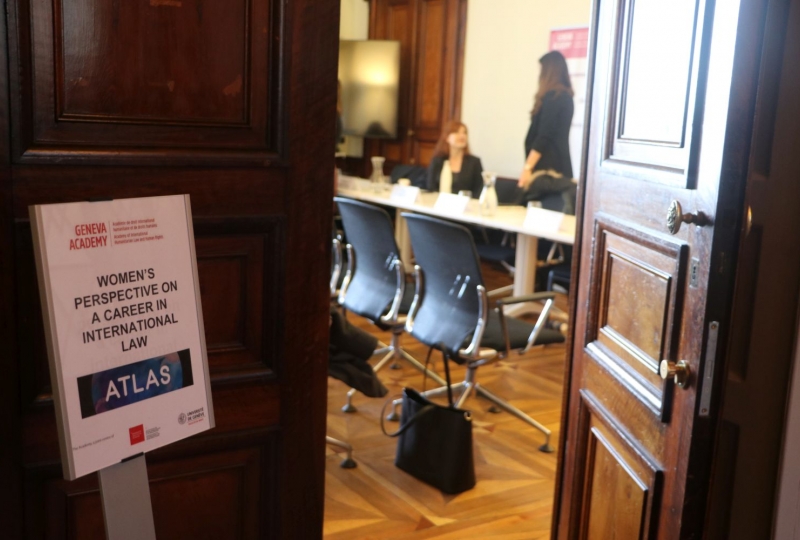 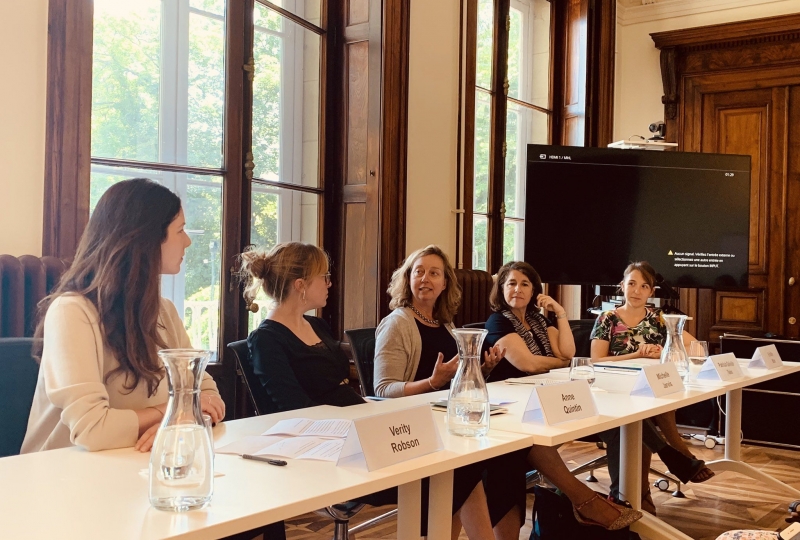 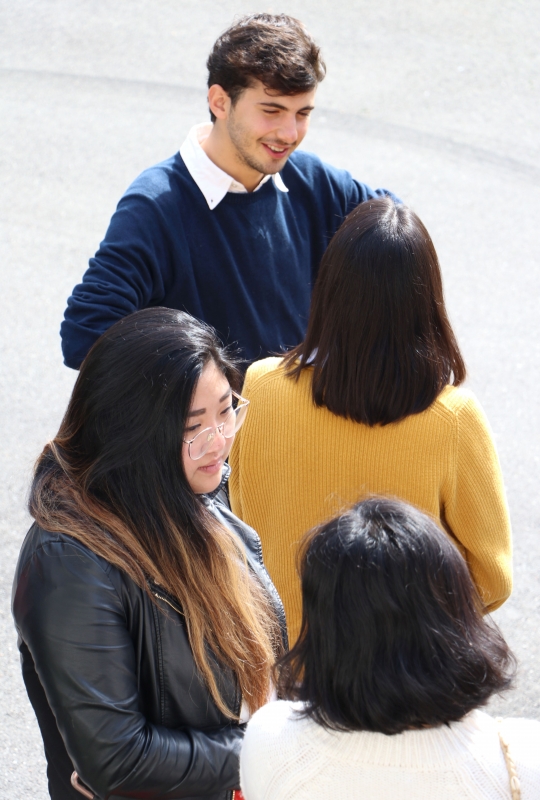